Our Move to Kenya – The Long Story

What? You’re moving to Africa? Although it’s been in the works for several months, many of you are just now finding out. So here’s a post to explain everything from the beginning.

The VERY beginning would be when I was very young…I had my own personal relationship with God since I was about 5. For my 7th birthday, my parents gave me a diary, which launched me into a lifetime of writing and journaling. Later that year, amidst entries about Bible verses I read and silly poems and short stories, I recorded my conviction that I was going to be a missionary to Africa.

That calling has been in the back of my mind my entire life, but my path never seemed to lead to missions. Through high school and a meandering college career I began to wonder if that little girl misunderstood. Maybe it only meant short-term mission trips, or perhaps the location was wrong…we had a deep desire to return to minister to the German people we came to love so much. But even when I tried to do those, I seemed to meet road blocks. Looking back, I know God had a bunch to teach me first, and what may have seemed like pointless wanderings were really experiences that would culminate to a wonderful toolkit for the work I would eventually be doing. Who would think you could connect my childhood farm, meteorology, the military, cancer, and nursing? That same winding path brought be exactly where I needed to be to meet a family that would change my life. 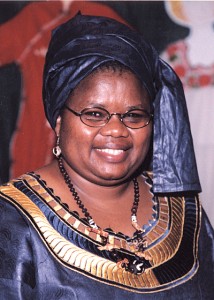 Meantime, in Kenya…a story unfolds of a missionary nurse named Mattie Tolley who served most of her life in Africa. When she came to work as a community health nurse at the Maua Methodist Hospital in central Kenya, she selected nurse Florence Mubichi to help her with orientation.  She became good friends with Florence and her husband Stephen, and was like a second mother to daughters Fridah, Miriam Kanana, and Ravena. Mattie also arranged for churches from her home state of Oklahoma to fund Florence and family to come to Oklahoma so she could earn her Masters degree in nursing. Florence eventually became faculty at the nursing school at OU, which is how our paths eventually crossed.

Tragedy hit when daughter Miriam Kanana was killed in a senseless accident when she was struck down by a motorist as she walked to take an exam for graduate school. The family created the Miriam Kanana Mubichi Foundation (MKMF) in 2003 to honor Kanana’s earnest desire to help the poor and disadvantaged. MKMF’s mission is drawn from her diary entries and life’s focus: to promote socio-economic development in Kenya by concentrating on literacy promotion, health education, and resource management training.  (More in MKMF in the next post.)

Only a few years later, Florence – the driving force behind MKMF – was diagnosed with late-stage ovarian cancer, and passed away in spring of 2010. I never got to meet Florence, but witnessed her legacy through several faculty and former students at OU. I came on staff at the college of nursing just after she had returned to Kenya to spend her final days with her loved ones. I learned more about her as I helped plan to honor her memory by creating a lactation room filled with her soapstone carvings and batiks from Kenya which celebrated motherhood. Florence’s daughter Fridah came to speak when we dedicated the room, and it was there I learned more about MKMF. As Fridah spoke, I felt a faint sense that perhaps this was the opportunity I had been waiting 30 years for. During the reception, I spoke to her about my desire to serve in Africa, and that perhaps someday when we’re between moves we would like to come out for a couple of years. (It would be easier to go when we have no house payments, etc.) She responded that if we could get ourselves there, they would provide a place for us to stay. That sounded great to me! But she didn’t think much of it…I’m sure she gets lots of people talking like that, never to hear from them again, or they only come for two-week mission trips.

In the meantime, I got accepted to nursing school, finished my degree, and got accepted to the PhD program. I was on the fast track with plans to work in cancer and palliative care research. It looked like I was going to be in Oklahoma for a long time! But even though this path made sense and the opportunities were laid out in front of me like stepping stones, in my heart I just didn’t feel at peace about it. Dale also had a growing sense that our lives would soon change. He was feeling like this would be his last year of teaching, and he felt a call to ministry. What next? He had no clue. Every door he explored just didn’t seem right. 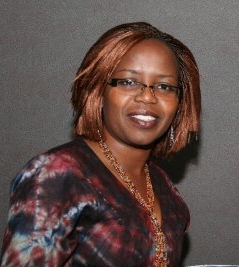 What finally put us on our new path? Okay, so don’t laugh – God can speak to us in some strange ways! Dale and I both grew up in places with terrain (Colorado and the Ozarks) and cooler climates. We missed ready access to hiking trails, camping, and tolerable summers. We were also miles away from family or even my Missouri hometown friends. Then came the hottest summer on record in 2011…we finally reached our breaking point! We had to leave Oklahoma! I started looking at grad school in the mountain states – Montana was looking really good, plus it put us closer to family! But then I revisited my thoughts from a couple of years before – if we moved it would be the perfect time, Riley was a great age, and Dale was ready to move onto something new too. I fired an email to Fridah to explore the possibility of coming out for a couple of years, and received an enthusiastic response. Who knew the journey that inquiry would set us on!

As we delved deeper into what we would be doing and how our skill sets dovetailed so nicely with the mission and needs of MKMF, it soon became apparent to both Dale and I that it would be very difficult to come back to a “normal” life in America after doing such work. We’ve had a growing sense that our time in Kenya will be much longer than 2 years. With the cost of long-term storage, we really needed to make some decisions about our belongings, so we took a leap of faith and are jumping in headfirst, expecting to stay for many years. Besides an incredible need, wonderful people, and important ministry, we’ve heard nothing but good about Meru itself. 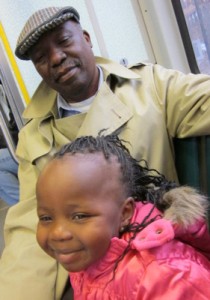 Part of the family who is adopting us - Stephen Mubichi and Ravena's daughter Alexia ("Munchie"). She is growing fast, and is a bundle of entertainment...I know she and Riley will be good friends!

As a meteorologist, I was quick to look up the climate…Meru is located literally on the equator at about 5,000 feet in elevation. Many years ago I did forecasting for missions in Africa staged out of Kigali, Rwanda which was also near the equator at similar elevation. The average high every month was a wonderful 75 degrees! I thought back then, what a perfect climate, and now, I get to live in such a place! Meru has two rainy seasons that can also make it rather cool, down to the 50’s, and a lush green fading into the savannas that contrast sharply with the deserts to the north and east. We will be living near the slopes of Mount Kenya, the second-highest peak in Africa, and will also be within a day’s drive of beautiful coastline along the Indian Ocean. I wish I could say we were sacrificing a lot to be missionaries, but that wouldn’t quite be true! I’m so glad God is placing us somewhere that matches our desires – to be near mountains and wonderful outdoor activities, to be able to have a farm, and to live somewhere that moves at a slower pace but still have access to modern amenities. (Yes, we’ll be living in a house with running water and even broadband internet, not a hut!)

The most beautiful part of this story returns to the Mubichis. Fridah, who is currently working on her PhD in the USA, now carries the torch as CEO of MKMF. In light of all the tragedy and lack of on-ground support, she was feeling frustrated and wondered if they could keep the foundation going. I learned of a conversation she had with Mattie long before Dale and I came into the picture, “What you need is an American couple who are willing to come out there and work.” Fridah thought that was a big dream, it seemed so impossible…who on earth would be willing to do that? It’s so amazing to be part of God’s answers to their prayers, and such a specific answer! Yet we’re the ones who feel blessed. I have already been adopted by a loving family, and in the process have gained a sister. I can’t wait to see what the future holds for our two families!In the next post I will explain what we will be doing and more about the foundation and Meru itself.

Posted under Kenya,MKMF and tagged with africa, meru, our mission
Comments (4)

4 Responses to Our Move to Kenya – The Long Story