Matthew Study Part 2 – An Overview of the Gospels 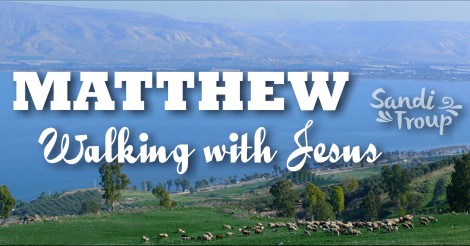 When there is a big event, we tend to read different news articles about it.  For example, for major events in Kenya or East Africa, I may like to see reports from one of the national papers like Daily Nation, BBC for a global perspective, and perhaps a couple of USA-based reports such as CNN.  Why?  Because each offers a different viewpoint and different intended audiences, that when put together can offer a complete picture of the event and its impact on the world community.

The four Gospels give us similar differing perspectives.  As I mentioned in our first session, when doing Biblical studies, it is helpful to understand when a book was recorded (and history surrounding it), who wrote it, and the target audience.  Although our study is in Matthew, occasionally I will refer to other books for a different viewpoint.  The following is a summary of the basic facts about each Gospel.  This is a very abbreviated list…if you want to take a deeper look, please contact me, and I’ll give you more resources.

The Author: Matthew (Greek name) or Levi (Hebrew name) – a Jewish tax collector who was recruited to be one of Jesus’ twelve disciples (see Matthew 9:9-12; Mark 2:13-17; Luke 5:27-32).  Several passages clue us that he was likely from Capernaum, Jesus’ home base for ministry.

Timeframe: Written before the destruction of the temple in Jerusalem in AD 70.  Most scholars believe it was written between AD 50 and 60, so may have been the first Gospel penned.

Purpose and Audience: Matthew was written by a Jew for a Jewish audience, focusing on Jesus as the promised Messiah and King.  Many Jewish customs are unexplained, assuming a familiarity with ceremonies, practices and teachings. 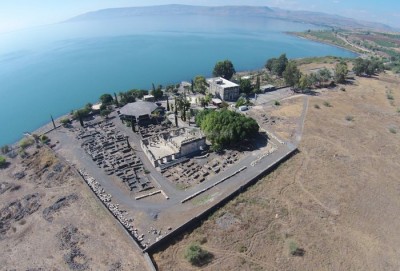 Remnants of Capernaum, at the north end of the Sea of Galilee, where Jesus recruited many of His disciples. (Image Source: BibleWalks.com)

Timeframe: Many scholars believe Mark wrote the Gospel in Rome under Peter’s supervision.  Peter is thought to have arrived in Rome sometime after AD 60 (otherwise Paul would have included him in greetings in Romans), and was executed by Nero around AD 65-67.  I’ve seen a large range of possible dates, but most scholars seem to agree Mark was penned between AD 57-68.

Purpose and Audience: Mark was written from Rome for gentile Christians (especially Romans) facing persecution under the Roman emperor Nero.  His gentile focus and intended audience outside of Judea is apparent in his explanations of Jewish customs and local geography.  Mark’s action-packed account was concerned more with impact, and thus was not a strictly historical narrative as Matthew and Luke were, which is why the order of events may vary from the other Gospels.  His focus was on Jesus’ suffering as a servant who also conquered life and death, giving early Christians encouragement to endure persecution with the hope of Jesus’ triumphant return.

The Author: Luke was a Gentile physician who joined Paul on his second missionary journey at Troas (note change from “they” to “we” between Acts 16:7 and 16:10).  Early historians record that Luke was from Antioch in Syria, and may have been exposed to the Gospel at Antioch (Acts 11:19-26), but by Paul’s second missionary journey may have been dwelling in either Troas or Philippi (see map).  At the least, Acts shows a lot of interest and familiarity with Philippi, and Luke apparently remained in Philippi from Acts 17 to instruct the infant church, and later rejoined Paul at Troas (Acts 20:13).  He accompanied Paul to Jerusalem just before his imprisonment, and was with Paul on his journey to Rome when he appealed to Caesar.  It is likely Luke remained in Judea during Paul’s imprisonment in Caesarea (between AD 57-59), and used his proximity to Galilee, Jerusalem, and Antioch to conduct personal interviews and research for the content of Luke and Acts.

Timeframe: Acts concludes with the first Roman imprisonment of Paul, so the earliest Acts could have been written was AD 62.  The book of Luke predated Acts (the “previous account” referred to in Acts 1:1), so is thought to have been written between AD 60 and 62, after utilizing the years of Paul’s imprisonment in Caesarea under the Governors Felix and Festus (Acts 23:23 to 27:2) for collecting first-hand accounts (Luke 1:1-3).

Purpose and Audience: Both Luke and Acts were dedicated to “Theophilus,” which means in Greek, “friend of God.”  Theophilus could have been a pseudonym for early Christians, or more likely an actual person – possibly a Roman dignitary – referred to as “most excellent” in Luke 1:3.  Theophilus may have even been a member of Caesar’s household (Philippians 4:22), or the one who funded the production of Luke’s two volumes.  The purpose of Luke was very clear, “to write an orderly account…that you may know with certainty of those things in which you were instructed” (Luke 1:3-4).  It was written by a Gentile for gentiles.  His perspective as a physician is apparent, with a lot of attention in both books to illnesses and healing.  He was well-educated, using a formal version of Greek similar to that of classical literary works and the Septuagint (the Greek translation of the Hebrew Old Testament). 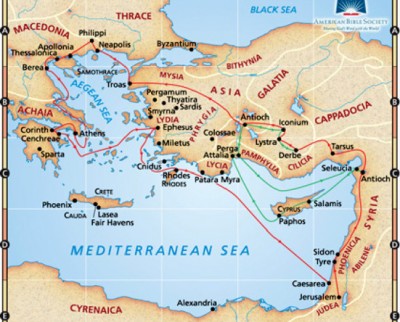 The eastern Mediterranean in the 1st Century – note the location of Troas, Philppi, Antioch of Syria, and Ephesus.

The Author: The disciple John, brother to James and son of Zebedee.  His family had a flourishing fishing business on the Sea of Galilee, evidenced by the presence of hired servants, multiple boats, and business partners Andrew and Peter (Luke 5:1-9, Matthew 4:18-22, Mark 1:16-20).  John’s mother Salome may have been Mary’s sister, which would have made John Jesus’ cousin (Matthew 27:56, Mark 15:40, John 19:25).  John’s position in the Last Supper would have been taken by the youngest of the disciples, and he was thought to be at least 10 years younger than Jesus.  Jesus gave John the responsibility of caring for Mary at his crucifixion, and they initially dwelled in Jerusalem until they left before the Romans invaded the city and destroyed the temple around AD 70.  Early historians record that John moved to Ephesus (see map – western present-day Turkey), and remained there until he died of natural causes (close to AD 100) after returning from his exile to the island Patmos (thought to be AD 95-96).

Timeframe: The book of John is thought to have been written before his exile, around AD 85-95, when John was already an old man.  The Gospel gives a unique perspective of a disciple who had many years to ponder Jesus’ teachings, and to highlight the essence of who Jesus was – specifically his preexistence and deity.

Purpose and Audience: Since the other Gospels had been circulated years before, John did not seek to duplicate their content; in fact 93% of the book of John is not included in the other Gospels.  The purpose of the book is clearly stated in John 20:31, “…that you may believe that Jesus is the Christ, the Son of God, and that believing you may have life in His name.”  John was written with gentiles in mind, using elements of Greek philosophy in the prologue and offering explanations for Jewish customs, names, and locations that would have been unknown to gentile readers.  John’s other books (I, II, III John, Revelation) also reveal struggles within the early church to battle rampant false teachings; John specifically addresses facts about Jesus to refute some of these beliefs threatening to degrade the true Gospel.

The Life of Christ (part one), Generation Word

Exploring the Gospel of John: An Expository Commentary, John Phillips, 2001

Posted under Bible Study,The Book of Matthew and tagged with Gospels, Matthew
Comments (0)