To Nairobi and Back

I has already been 3 months, and time to extend our Visas so we can stay in Kenya.  Unfortunately, that requires a trip all the way to Nairobi!  But I was kind of looking forward to this one. We had been living with some plumbing and electrical challenges, I was really looking forward to enjoying some modern conveniences and purchasing hard-to-find items in the “big city.”

We had an uneventful drive descending through the lush, curvy mountain roads to Embu, past the rice fields of Mwea, then onto the awesome Thika super highway.  (I wish there was much more of that!)

We went straight to the Yayo House for immigrations…I think a better name would be the “Yo-Yo” house! We went to window 8 first, then were told to go to window 6.  Window 6 said we really needed to be at window 5.  Window 5 said we needed to get something at window 4, then back to window 5.  We were sent to window 3 to pay a fee, then 2 when she was too busy and the other guy was sitting doing nothing, back to window 5, then we were sent to window 1, and waited until we were called back to go down the hall for fingerprinting and registering again as aliens.  Then back to window 1 to be told we went through all that and wouldn’t even be able to pick up cards for 6 weeks!  I think we only missed window 7!  Maybe next time, LOL, but we were certainly ready to live that place and get to our hotel for much-needed rest and relaxation!

We were sent to all but one immigration window at Yayo House.

Our adventures with the van began on our way to our hotel, all the way across town in rush-hour traffic.  It started overheating, and a safety in the engine makes it die if it crosses the mid-point on the thermometer.  Bummer!

We finally made it to our rooms on the west side…we had rooms reserved at a guest house that we were told had much better rates – only $25 per adult, but were a bit disappointed.  We were first brought to a room with 4 bunk beds and shared bathroom, even though we thought reservations were made for a family room with private bath…hardly the restful reclining we intended on.  The management thankfully moved us to another room with private bath, but 3 separate beds.  It was okay.  The simple buffet dinner was also less than stellar, especially when we found out we were charged 1000 ksh each!  (We could eat a large meal at a restaurant for under 600 ksh.)

We planned on leaving the next morning, but first wanted our engine checked out.  Kenya AA came with a couple of mechanics, and they pointed out a couple of issues – the radiator lid was jerry-rigged, and the hoses were crimped so much that flow was reduced (they weren’t curved like they should be).  The mechanics were going to try to find appropriate parts for us since we didn’t know the town, but they called about an hour later saying they wouldn’t make it back.  Oh well.  🙁

So we made the decision to stay another day in Nairobi and try to find the parts on our own.  It was a wonderful diversion…we found the hose we needed, and we found a great shopping center where we parked much of the day.  We got to shop for some household goods that we haven’t been able to find in Meru, eat some awesome Asian food, and even catch the new Star Trek movie at the cinema.  What a treat!  We switched hotels to one we knew was good – Gracehouse Resort – and had the most awesome tender beef we’ve ever had in Kenya!

We left the next morning, thinking our vehicle woes were over.  We decided to take the route west of Mt Kenya since it was less curves and fewer speed bumps.  We did pretty good until Kiganjo, where we overheated again and the van died.  We limped into the town itself, and AA met us again, and led us to a shade-tree mechanic to troubleshoot.  They ended up taking the entire radiator out to unclog, and we finally found a stock radiator cap.  After killing most of the day there, it was becoming too late to make the trip all the way back to Meru, so we decided to drive just a little further and stay in Nyeri at the White Rhino, which just happened to be across from the AA office.  It’s too bad it was already dark when we arrived – this hotel had a lot of charm.  It was here I finally got to accomplish one of my goals for the Nairobi trip – take a bath in a bathtub!  For a couple of months we were bathing with about a gallon of warm water in a bucket…I dreamed of soaking in a nice tub, and yes, it was great!

We finally made the last leg of our journey the next day (unexpected hotel fees were really racking up!).  We did good all the way to Nanyuki, and even got our first glimpse of wildlife other than monkeys!  We saw some zebras grazing alongside cattle in the high plains south of Naro Moru.  Past Nanyuki the van started acting up again with some long steep climbs before we started the big descent to Meru.  The van died in the countryside west of Timau.  We finally gave up and made some phone calls, and a friend agreed to come tow us home.  But he apparently had his own vehicle problems on his way, plus he had to have a welder make a towbar since the downhill sections would be tricky with a rope.  So “just a little while” stretched to hours…and hours.  Thankfully we were just across from a little roadside stand.  One of the sweet women came to check on us and ask if we were okay.  We expected help soon, but when it was delayed, I decided to go pass the time talking with these ladies!

It was a lesson for me to take time and be in the moment.  We were frustrated beyond description, but the time I spent sitting at that stand talking with those women was really rewarding.  They had fresh deliveries of peas from the farmers, and I helped them shuck them into buckets to sell to customers.  Riley eventually joined me.  I also did my best Vanna White impersonation as people pulled up, exclaiming “We have wonderful potatoes!”  I got a few chuckles at the muzungus helping sell vegetables!  We also had several children (out of school for teacher strikes) that sat beside us and also decided to help with the peas. 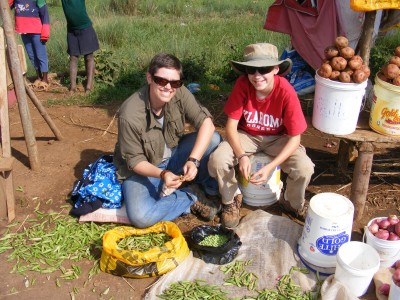 Shucking peas at a roadside vegetable stand west of Timau. It turned out to be a rewarding exchange of culture in an otherwise frustrating day!

Finally our help arrived just as the sun was setting, and we started a slow drive back to Meru.  We had some interesting detours and got to see some new locations, but we were sooooooooo ready to be home!  I think that was the longest anyone has taken to get back to Meru from Nairobi!