Many of you saw my celebratory post on Facebook that I finally fixed our washing machine!  It was a learning experience in several ways.  I got to push myself mechanically and even my minimal electrical knowledge as that’s what the problem turned out to be.  But this whole ordeal also held a rather painful lesson on how immature my faith can be sometimes. 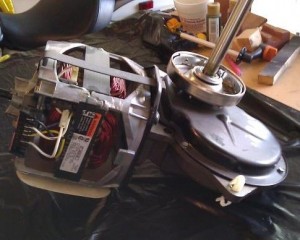 So this is what a washing machine motor and transmission looks like!

As my Facebook posts chronicled – our agitation cycle stopped working, while everything else worked fine.  Unfortunately, this wasn’t going to be an easy fix – all the solutions were going to cost more money than the washer was worth.  The motor was working fine, and the next most likely thing was a broken part in the transmission.  Instead of replacing the entire thing as most repairmen would do, I was going to dig into the gearbox, expecting to find a broken agitation cam (which also happened to be the only plastic part in the gearbox).  Since it was going to be a big oily mess, I wanted to have the part on hand before I opened it up.  It was such a specialized piece, I had to go to an appliance warehouse clear on the northwest side of OKC to find it.

So, once home, I pulled out the motor and transmission, and with some other tests, soon learned the problem couldn’t be in either.  After more research and some electrical testing, I isolated the problem to the timer circuit.  Bummer – there was no way to fix that, and a new one costs $120.  I would have much rather it been the transmission – I could have fixed it for much less!  I called the same appliance store, and they had a rebuilt timer for $75.  After checking Craigslist to see if this washer was even worth that much, I finally decided to go back and get the part.  At least I could exchange the part I didn’t need.

WRONG!  As the sales clerk looked up the timer, she informed me I couldn’t exchange the part.  “No refunds,” she said.  I looked at the receipt, it did say no refunds, but nothing about exchanges.  I explained, I didn’t understand that when I purchased the part, or I wouldn’t have gotten it ahead of time.  She started getting huffy, “it says it right there,” and pointed to the wall where NO REFUNDS was written in big black letters.  Why couldn’t I have seen that before?

I was getting frustrated, and explained my misunderstanding, “Lots of businesses have that policy, but they will still give store credit towards another purchase.  Nowhere does it say that you don’t accept exchanges.”  She ignored me and went to the back room to get my part.  After she returned I pleaded with her, thinking how expensive this whole repair was getting, “Please let me exchange this – I’ll be happy to pay a restocking fee.  I’m about to leave the country and am just trying to repair this so we can sell it.”

“No, once it leaves this store we cannot take it back.”

Now my blood is beginning to boil…why on earth do they have to be so rigid on this?  I never opened the package, and it wasn’t a special order, they had it in stock.  And they’re not loosing a sale – I’m about to spend a ton more!  I thought maybe she’s just following store policy, but c’mon, I’m not an appliance repairman or business, give me a break!  I though I would try an appeal – “Is there anyone else I can talk to?”

Okay, this is getting nowhere.  Let me just get my part and get the heck out of here!  Then as she opens the box to inspect the new timer, she asks, “Did you bring the old one?”

“I can’t sell this to you without it.”

Okay, now steam is coming out my ears.  Are you serious?  And you couldn’t you tell me this on the phone when I checked to see if you had the part?

“Well I guess I can’t get it then.”  I asked if they were open on Saturday, and left as cordially as I could muster.  By the time I got to my car I was determined I would rather be out shipping costs and loose a few days by buying online than to give them my business.  I peeled out of the parking lot and was throwing an adult-sized temper-tantrum as I drove home.  I was SOOOOO mad!  Mad that I had wasted the time and gas to drive all the way up there, and not be able to take home the part I needed.  Mad that I couldn’t get any credit on the part I no longer needed, and fuming mad that this lady was such a jerk to me!  And I was powerless to do anything about it except post on Facebook not to give them any business!  (Yeah, and how many of my Facebook friends are tearing apart appliances?  That won’t exactly put the hurt on them!)

So today I decided I would buy the part elsewhere.  Since it’s not so specialized, I should be able to buy it at our local store.  They probably closed at noon today if they were open at all.  I might as well take a better look at the timer, and test the wiring harness and any circuits I have access to.  It’s worth a shot for the very slim chance.

The wiring was all good, but I was able to remove a dust cover around the unit, so could see the timing mechanism.  I couldn’t access the internal circuits, but could see the multiple switch contacts.  I could barely stick a tool down in the unit to clean the contacts, which were really dirty.  I felt a new surge of hope…is there any chance that’s all it is?  I put it all back together and ran a small load, holding my breath until the agitation actually kicked in.  You would have thought I’d won a sports championship!

But as I returned to the other tasks on my list, I had time to reflect on this whole ordeal, and felt really ashamed of how I responded.  Thankfully I was civil to the lady in the store, and had calmed down before Dale and Riley got home, so my immature reaction was between me and God.  But in that teaching moment I felt fully scolded and ashamed of my behavior.  As the Bible promises, all things work for good for those who trust Him.  That frustrating encounter saved me $75!

How many of us have withheld something from someone temporarily so we could give them something better in exchange?  If they respond gracefully, it’s so much more joyful when they get the real prize.  But if they throw a fit, it puts the giver in a dilemma.  I know I’ve experienced those moments as a mother.  I’ve wanted so badly to give the best gift possible, and felt so sad that my son couldn’t trust me and restrain his desires just long enough for me to surprise him!

In this case, I feel like God is the patient father who still gave me the good gift but was saddened that I failed so miserably to trust Him.  I let my own selfish need for self-righteousness to steal my peace and the joyful reward for patience and faith.  I am grateful at how things worked out, and humbled by His grace even in my failings.  I realize how far I am from living and breathing in Him every moment, even in the face of frustrating situations.  But thankfully that is what growth is all about.  I hope this painful lesson will not be forgotten, and that next time I can respond with patience knowing that although I don’t see the immediate solution, I can have faith that God is the perfect father, seeking to make things work out for good.

Posted under Reflections and tagged with spiritual
Comments (0)