August 1st is an important day in the Troup family.  First of all, August 1st 1998, I married Dale Troup, the love of my life, in a beautiful outdoor wedding in Manitou Springs, CO.  When we said our vows that day, we affirmed we would be together for richer or poorer, for better or worse, in sickness and in health.  We had no idea that in 14 years we would test every one of those elements, but also what blessings God had in store through those difficult times!

You see, there was another life-changing event that occurred on August 1st.  On that day in 2005 – out of the clear blue – I was diagnosed with breast cancer.  I was 32 years old at the time, weary from a difficult tour in as a weather officer in the U.S. Air Force.  We had just returned to Colorado from overseas, and I was on terminal leave for my last week on active duty.  We were staying with Dale’s parents in Manitou Springs until Dale found a house in Oklahoma and our household goods arrived from Germany (about 3 months).

It was a difficult choice to leave the military, but I wanted to have another child, and be a stay-at-home mommy this time, no deployments, no long training trips, no emergencies calling me in to work in the middle of the night!  Beyond that I wasn’t sure what I was going to do with the rest of my life.  I was ready to move on to something else, maybe teach science, maybe a management job…it was a little unnerving for me to be facing such an unknown, but I figured the answer would present itself.  And it did, much faster than I anticipated.

The morning after we touched down, a tiny pencil eraser-sized lump below my armpit (that a couple of months ago a physician had told me was nothing) had suddenly swollen to about an inch in size.  Thankfully I had the sense to realize that maybe I needed a second opinion.  After all, I only had one more week on duty – if it turned out to be something, at least it was documented in my military records and I could follow up with the VA.  The staff at Peterson AFB were wonderful, and got me in to see the doctor that day.  He was concerned, and had me booked for a mammogram later that week.

So I dropped off Dale at the airport that morning (he was flying to Oklahoma to house hunt and prepare for his teaching job at Carl Albert High School), then went to my mammogram appointment, expecting it to be nothing.  Then I had that dreaded callback for more images.  After quite a while I was called back to talk to the radiologist.  He showed me my films, and little tiny specks called micro-calcifications in an area far from the lump I felt.  They can be from dried milk in the ducts, but in the right pattern can also indicate cancer activity.  He wanted to watch it for 6 months, and take another image to see if there were any changes.  That didn’t sound too scary, and I was just happy it was documented.  I would just follow up with the VA.

The radiation technician I had was wonderful.  She was a Master Sergeant who was usually doing management duties, but was filling in that day for someone who was out.  It’s funny how these little “coincidences” can be God’s hand.  She probably had more experience than that young radiologist, and convinced him that since I was about to get out of the military, maybe they should just go ahead and check this out now.  So they made an appointment for a biopsy, which had to be done at the Air Force Academy.  The wonderful staff at the hospital got an extension to keep me on duty for another month to give us time to get back the results, which took an agonizingly long time!

I had a lot of sleepless nights waiting for those pathology results.  I had a growing sense that the results would show cancer.  I remember one night I was up long after everyone else had gone to bed, looking a the peaceful mountains, grappling with the reality that this could be cancer.  It didn’t seem like it could be real!  I had no family history, and had up to this point had been in near perfect health.  I had no idea how bad it would be, but had to come to terms with the possibility that this could take my life.  But I believed that God had a purpose, maybe as close as the next room.  Dale’s parents were as hard-set against God as Dale was before He softened his heart.  Mere words didn’t have a chance…but maybe seeing my faith through this tough time would speak to them.  Through my tears I offered myself as an empty vessel for God to work His will, even if it took my life.  When I looked at things from eternity’s perspective, my life seemed a small sacrifice.  Once I released the worst case into His hands, I felt an incredible peace and courage to face the news I received a couple of days later. 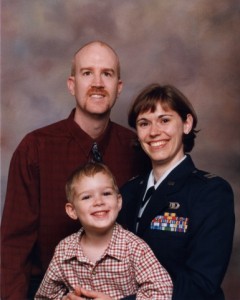 This picture was taken the day before my first mastectomy. I wanted one last picture in uniform, expecting to soon be losing my hair!

Long story short, I had a high-grade (aggressive) cancer, but miraculously it was still contained within the ducts.  However, there were at least 6 different foci, including the area where I felt my lump.  I am so grateful to the radiation tech that talked the radiologist into not waiting another 6 months…my situation may have been very different!  I had no choice but to have a mastectomy – the cancer was just too widespread.  My plans for another child were dashed when I had to go on a hormone therapy to reduce the risk for my other breast.  Even that therapy failed to prevent pre-cancerous cells from developing on the other side, and at my oncologist’s recommendation decided it was best to have a second mastectomy.

Those past 7 years since my diagnosis have held several ups and downs, scares, sleepless nights, and 6 surgeries, but I wouldn’t trade it for the world.  When I look back, I see God’s hand through the whole process.  With God, the journey is every bit as important as the destination.  I grew so much over those years in faith, but also as a person.  I had no idea what I was going to do after leaving the military, and in a matter of months, it was like my next task was handed to me on a platter.  I co-founded a support group for young women (SHOUT), and have been able to minister to hundreds of women as they face one of the most difficult trials in their life.  Then I noticed a lack of information for cancer survivors and set out on several projects to change that.  I was hired to create a patient resources program for the OU Cancer Institute (now Stephenson Cancer Center), and soon discovered I really wanted the credentials to be able to write those resources in a language survivors could understand, so I set out to go to nursing school – that journey alone took several years, but now I’ve been an RN for a year.  Along the way, I had several opportunities that have developed me professionally – I helped coordinate state efforts to reduce cancer in Oklahoma, I’ve done breast cancer research in a biomedical lab, and now I’m designing research studies to improve quality of life for cancer survivors and other people living with a chronic disease.  That winding path helped me bump into Fridah Mubichi, which set my heart on fire for our next assignment – Africa!

The most amazing thing is that God provided the very way for us to go to Kenya without needing to wait for funding.  You see, the VA considers a mastectomy a form of amputation, and a special one since it’s a reproductive organ.  Combined with my lifetime risk for lymphedema and a handful of other ailments that just comes from being in the military long enough to age, I receive a disability pension that is just enough to meet our needs overseas.  In short, my cancer is sponsoring our mission!  If you told me all this 7 years ago, it would have blown my mind!  And really, I wouldn’t be ready for it…I had too much to learn first.

I hope this extremely long tale encourages a few of you facing your own impossible trials.  I was reminded today in reviewing Joseph’s story that bad things do happen, but God promises to be there in the middle of it with us, just like He was in the fiery furnace with Shadrach, Meshach and Abednego.  He promises to work those things for good for those who love Him, and submit themselves to Him to mold them and shape them into what He wants them to be, for the purpose He predestined them (Rom 8:28, Eph 1:11).  When he was in his teens wearing that technicolor coat, there’s no way Joseph was ready for the responsibility he would eventually face as the second-highest command in Egypt.  God used the tragedy of his betrayal to put him in the geographic location he needed to be in, and the ups and downs and long imprisonment to shape his character into an incredible leader that saved all of Egypt and his family.  Don’t lose hope when you face these storms…God is always in control, and if you let go and trust the Great Navigator to guide you through, you may discover he has something REALLY amazing in store for you on the other side!

Posted under Reflections and tagged with our mission, spiritual
Comments (5)

5 Responses to Blessings in Breast Cancer