I lost another young friend to cancer yesterday.  She was about my age, a nurse with compassion and zeal for life.  Since we formed our cancer support group for young women over 6 years ago, and each year brings heart-wrenching loss as I watch fellow warriors fall long before their time.  It’s even harder for me since most of those women had young children that would have to grow up without their mother.  As a mother myself, it broke my heart. 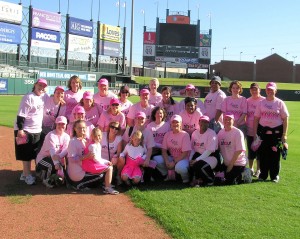 This is several of our SHOUT members in 2007, shortly after we formed. Since then, many of these beautiful women have passed away, leaving loved ones and young children behind.

One of the hardest things for any Christian to answer is if there is truly a loving God, how can He let this happen?  It is even harder to accept when the victim of an accident or tragedy is so young.  Why doesn’t God intervene?  I wrestled with this for years with loss after painful loss, then I finally realized…He did.

Earlier this year, I led a Bible study on the book of John.  It was eye-opening for me as we went verse-by-verse, looking deep into the culture and original Greek language for the richer content often overlooked.  I spent a lot of time contemplating the passage in John 11 when Lazarus died.  Jesus knew He was going to raise Lazarus from the dead (verses 4 and 11), so why did He weep?  Many people concluded it was out of empathy for the sorrow of His loved ones.  I think this was in part true, but my review of the Greek brought out a puzzling passage.

In verse 33, NASB says when Jesus saw everyone mourning and weeping He was “deeply moved and troubled,” but a more accurate translation would be that he was “angry in spirit and deeply agitated.”

Why was He angry?  Was He frustrated with the lack of faith?  He tried to get His disciples and Martha to understand that He had the power to raise Lazarus from the dead, but what He was about to do was such an incredible and unexpected revelation of His power, He showed patience that no one could quite wrap their minds around the possibility.  I don’t think that was the cause of His anger.

Every time I lose a friend to cancer, I feel angry.  I’m not angry at God or the limits of medicine, I’m angry at the injustice of death, especially when it takes someone so young.  Imagine Jesus standing at the dawn of creation seeing what was good and perfect sent crashing down as the Destroyer introduced sin into the world.  Yet even as it happened, the plans were set in motion for the greatest rescue mission in history.  I think Jesus was fuming mad at death and Satan for bringing this misery upon His creation!  He was deeply troubled as He witnessed the tears and anguish of His close friends and He wept with them.  I imagine as He called Lazarus from that grave as a precursor of His own resurrection and eternal victory over Satan, He felt a surge of resolve to face the torture ahead of Him so we can say, “O Grave, where is your victory, Death, where is your sting?” (Hosea 13, I Corinthians 15:55)

When I understood that, I finally had an answer…God didn’t idly stand by in the midst of our suffering.  As God does, he crafted a solution far beyond our expectations and even understanding.  He left regal comforts we can’t begin to imagine to enter a humble life as a human.  He felt the same temptations, grief, sorrow, and anguish that we have, and endured a horrible death to offer this solution.  All we have to do is accept it!

A few years ago, I had a dear friend who fought advanced ovarian cancer for years.  I visited her frequently, and listened to her as she shared her thoughts.  She hoped and prayed that she would be cured even to the end, but was also at peace with the likelihood that she would not beat this disease.  Shortly before she died, she confided in me, “Either way, I know I am going to be healed.”   She is one of my great heroes – she had the faith to see past this world, to have the confidence in what we hope for and assurance about what we do not see.

With each loss I feel more acutely aware of how short life really is for all of us compared to eternity.  I remember in my meteorology courses, we had complex equations with numerous terms.  To make equations manageable for the computing power available, we would reduce the terms to as few as possible.  Whether the numerator was 1 or 1000, when it was divided by infinity, the whole term was essentially nullified.  In truth, even Methuselah’s 900 years were still only like a vanishing vapor of breath in the cold morning air when compared to eternity (James 4:14).

So how should this change our perspective?  First, we should not grieve as those who have no hope (I Thessalonians 4:13).  Second, it gives us courage to live.  Even though we may suffer and life seems to crawl along without our loved ones, we can know that soon this will seem like only a blink of an eye.

Yes, bad things happen.  There are tragedies, debilitating illness, chronic diseases, premature deaths, abuse…but God offers us the hope of something so much better.  And those of us who are survivors have the challenge – what will we do with our precious time on this earth?  We have the opportunity to let God turn those hurts and tragedies into a ministry to reach others who are suffering, others who may not yet have the hope that we do.  I have been honored to know so many who have done just that, including my friend that went home yesterday.

As I become more aware of eternity in my daily life, I also feel a burden to make my time count.  I remember those haunting words at the end of Saving Private Ryan, “Earn this.”  Many people who face a cancer diagnosis ask “Why me,” but every time I lose a friend my age to cancer, I find myself asking, “Why did I get to live?”  For some reason God left me on this earth for a while longer.  I look forward to the reunions with my loved ones and to be swept away from the cares of this world, but I have work to do!  What am I doing today that matters?  When I’m called home and face an accounting for how I spent my life, will I be considered a good steward?  As painful as it is to lose a loved one, I’m grateful for these reminders that make me re-evaluate where I am.  My only hope is to be greeted with a “Well done, my good and faithful servant.”

Posted under Reflections and tagged with spiritual
Comments (0)