We finally arrived in Kenya!  I can’t say how happy I am that all this airplane travel is complete.  Thanks to Ravena who met us at the gate, things went very smoothly at the Nairobi airport.  She guided us right past the long line of people waiting to get visas to another gate that was completely vacant.  Luggage pickup was super easy too.  Our driver David was waiting with a van to take our many items to Ravena’s house.

It sounds like our best chance to see wildlife outside the parks was actually right next to the airport!  There is an area where it is common to see giraffes and zebras, but not today!  But as the sun rose we could make out the hallmark shape of acacia trees…yep, we’re really in Kenya now!

The drive to Ravena’s was baptism by fire to Kenyan roadways.  I was sitting beside our driver in the front, and thought for sure we were going to rear-end the car in front of us – people are always trying to cut in, so many keep within a centimeter of the next car’s bumper to keep them out.  We passed a couple of private schools where parents were dropping off their children.  Between the narrow roads and drivers unwilling to let anyone in, we were at a complete standstill for half an hour.  I was happy to finally arrive at the house to let ourselves absorb where we were.  But the first order of business after a quick breakfast was a nap!  We only got a couple of hours of sleep on the plane, so were dead tired.

Everything was pretty much as we expected from previous pictures.  Ravena’s house is very nice, within a guarded compound of homes.  Strangely, these nice homes are within sight of one of the largest slums in the world.  I’ll mention a few things that were different for us.  For one, there were a ton of mosquitoes!  They were all over the wall, and especially in the bathrooms.  When I would open the lid to the toilet, several would fly out.  For a mosquito magnet like me, that was a bit unnerving.  But I didn’t get a single bite!  Unlike the stateside mosquitoes that flocked to me, these seemed uninterested.  Ravena informed me that only mating females were bloodthirsty.  What a relief!  We later read in the paper a discussion of the surging mosquito numbers in that area of town, and concerns of an epidemic of disease transmitted by them.  So it was good to know that was abnormal, but hoping officials will be successful in their attempts to curb the population explosion. 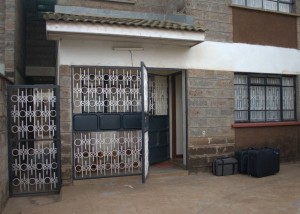 Our luggage outside Ravena’s house. The house had its own gate and courtyard for security, plus the houses in this area were in a gated compound with 24-hour guards. We’re finding this level of security is very commonplace. Even customers at shopping centers have to go through a check with wands before they can enter. 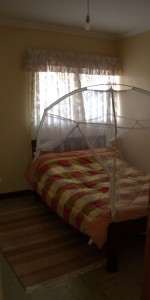 One of the bedrooms at Ravena’s house, with the necessary mosquito netting.

Another difference is the shower and bathroom setup.  I’m grateful we actually have stools to sit on, unlike the holes in the floor I’ve used in other locations!  The shower is no-frills – just a drain in the corner of the bathroom.  There is a switch by the bathroom light switch to turn on a heater, which heats water as it comes through the shower.  Otherwise, there is no hot water in the house.

We got our first shopping experience at a shopping center/mall a few blocks from Ravena’s home.  We bought some shower shoes and got to scout out prices on the appliances we would need.  Thankfully, it looks like we will be able to set up our home for an affordable amount.