It’s hard to believe it’s only been a few days since we arrived!  It’s going to take a bit to catch everyone up!

We left Nairobi for Meru on Wednesday.  The drive gave us a great view of the central business district of Nairobi, which had some beautiful architecture for some of the skyscrapers.  I was really glad to leave the city though – between burning trash, heavy traffic, and old cars coughing black fumes, the air was causing my throat and eyes to burn.  There was actually a six-lane divided highway between Nairobi and the turnoff for Thika (where Elspeth Huxley’s story took place).  A very unusual feature for such a highway was the numerous speed humps at crosswalks, so pedestrians could safely cross.  More work is still being done by Chinese contractors, including several overhead crosswalks. 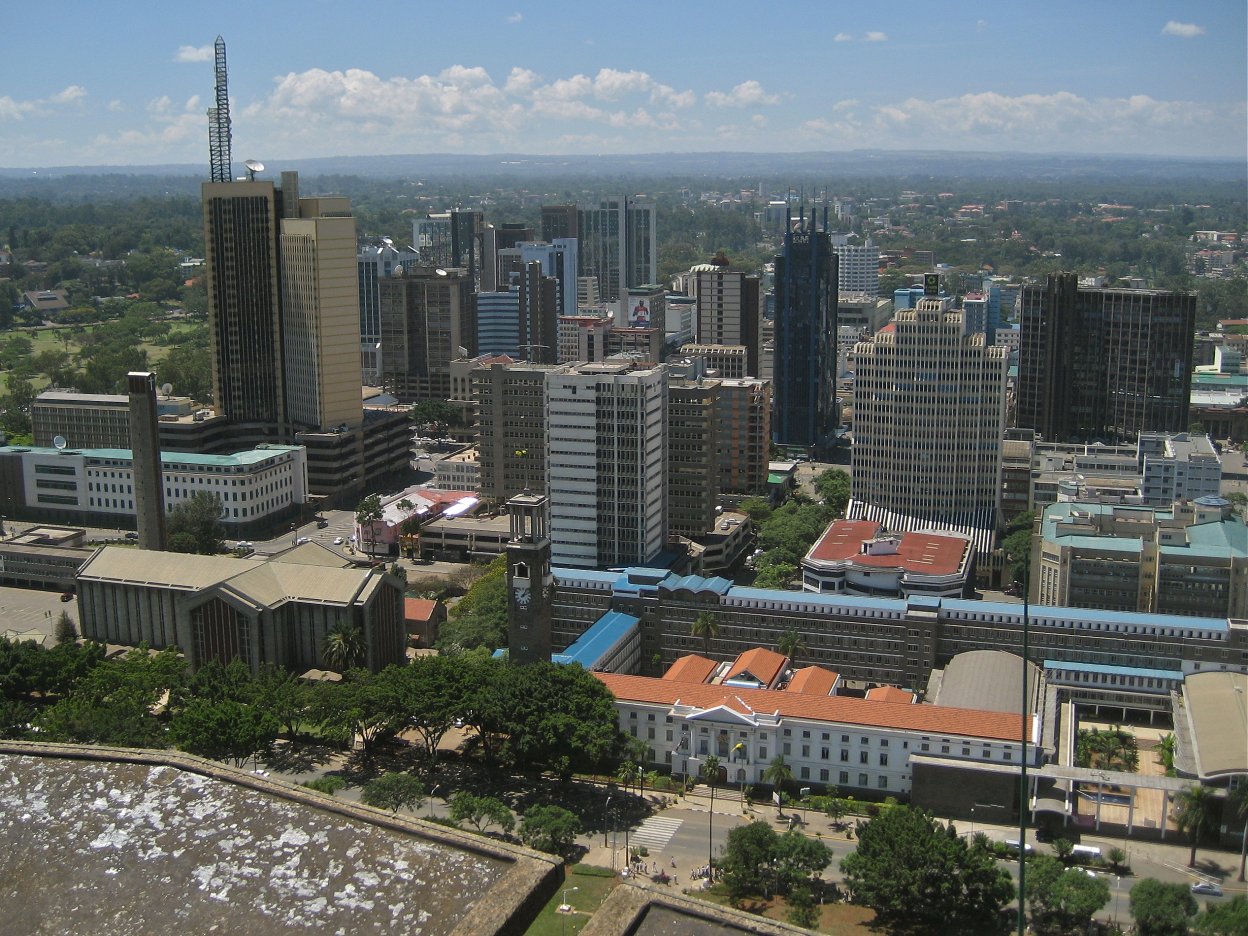 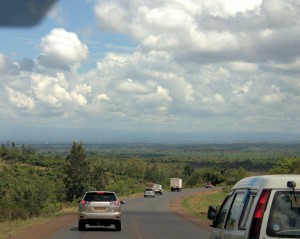 The beautiful view after the road narrowed just past the turn for Thika. 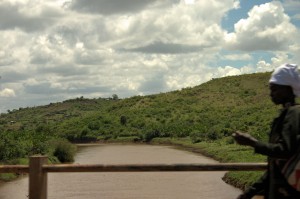 Crossing the Tana River, an important river for Kenya. 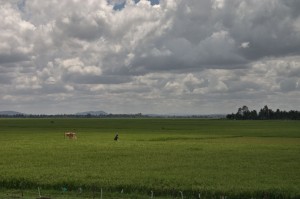 Rice fields in the Mwea region southwest of Embu

The road narrowed to four lanes and then two.  Even though the distance was actually pretty short, speed humps all through the route really slowed things down.  We stopped at the halfway point (timewise) in Embu at a beautiful hotel/restaurant called Izaak Walton Inn.  There were several guest cottages surrounding a beautiful grassy area with tables – like I would imagine a British country club.  We ate a buffet with lentils, roasted goat meat, spinach, and chapati.  My stomach was starting to feel a bit uneasy by this point.  As careful as we were, I probably got something in my tummy in Nairobi my body didn’t like.  I had hoped I was just hungry, but felt worse after eating. 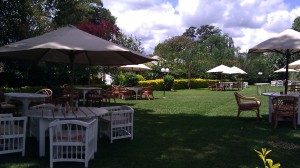 The peaceful sanctuary at Izaak Walton Inn in Embu where we ate lunch. 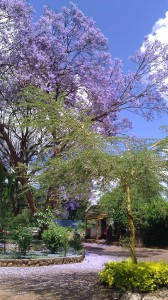 The mountain roads between Embu and Meru were absolutely beautiful with steep hillsides covered in banana trees, coffee, tea, and maize crops.  Several streams ran at the base of the hills.  We zipped along the curvy roads, then leapfrogged between the endless speed bumps in the busy villages.  By now I was feeling pretty sick, and the perpetual smell of burning trash, winding curves and lurching from speed bumps just about did me in.  I was eying the sides of the road, thinking how awful it would be to lose my lunch in front of all the locals.  (People were walking beside the road everywhere, including the countryside.)  I was trying to take in the beauty, but earnestly counting down the kilometers to when I could get sick in the privacy of a home!  Finally we pulled into our house, and I emptied my stomach before the van was even unloaded!

It was already late in the afternoon, and we had a lot of appliances to buy before we could be self-sufficient, so Ravena and our driver took us straight to the local supermarket Nakumat.  I felt terrible, but wanted to be on this trip, so piled in the van with a backup plastic bag.  Before we made it a quarter of the way through the store, I ended up using it.  Fun!  (One day, when we tell our many stories of our time in Africa, I know we’ll all get a good laugh out of this experience!)  Oh well…the next several hours were absolute misery.  Thankfully a chemist (pharmacy) was just next door to Nakumat, so I was able to get Immodium and a couple of other aids to get me through the next couple of days.  I hadn’t been that sick in a VERY long time.  Thankfully Dale and Riley have so far been just fine.

So really yesterday (Friday) was the first day I really got to feel like myself in Meru.  I love our house – it’s almost as big as what we had in Oklahoma.  The downstairs has a large living room, with an archway to a dining room.  We have a huge pantry and a kitchen with a door that leads to the back where our laundry lines are.  We have banana trees, and sugar cane in the back and side of the house.  On the other side of the hedge are chickens and little chicks that adventure to our side every now and then.  (I love waking up to the sound of a rooster crowing in the morning!)  Upstairs we have three bedrooms.  Our master bedroom has its own bathroom and small balcony.  We discovered this morning our spare room (soon to be library/office/school room/guest room) has a great view of the mountains.  We could barely pick out a rare cloudless view through the banana trees of Mt Kenya this morning. 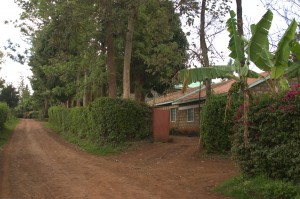 A country road from Meru town in on the left, the gate to our compound is on the right. You can see banana and avocado trees right by the gate. 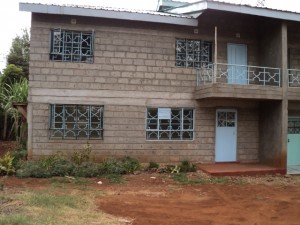 This is our two-story house. It’s actually quite large, with living room, dining room, kitchen, pantry, three bedrooms, and an awesome balcony for the master bedroom. We’re very grateful for this blessing! 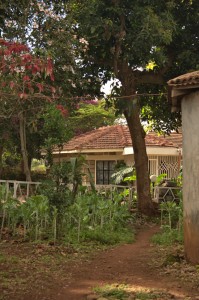 There is a pathway between our complex and the Mubichi home through a garden. You can see a poinsettia tree on the upper left, just now turning red. Stephen Mubichi has showered us with fresh produce from the garden and pick of the day from local markets. We are eating very well!

The last couple of days, we have just been trying to set up house.  The Mubichi family has graciously furnished us with a kitchen table, living room furniture, beds, and dishes, which has really helped us out!  We’ve made several trips to Nakumat, buying everything from appliances to mattresses, lamps, and groceries.  The house is finally starting to resemble less of an echo chamber and piles of suitcases to a livable home!  Dorcas from MKMF was invaluable in assisting us with our second shopping trip, recommending the better items.  She also helped us get set up with new sim cards for our phones so we can rejoin the world.

Yesterday we had even more assistance from Doreen, the Mubichi’s house assistant.  She helped us clean the floors, our borrowed dishes, and most importantly, taught us the most efficient way to do laundry by hand.

So – a snapshot of life today…I awoke with sun streaming through our window and the crowing of the roosters next door.  Alexia (Mubichi’s granddaughter) showed up early to play with Riley, along with several neighbor kids.  The courtyard area is alive with laughter and various games.  They played nearly all day with the box our refrigerator came in, and made a temporary ball with a dahlia flower!  Dale and I explored the Mubichi property this morning, and came back at their insistence with bananas, potatoes, and cabbage leaves.  We are still waiting for the IT guy to give us the information we need to tag onto the router here.  It’s taking a long while!  So hopefully I will actually get to publish what I’m writing soon. 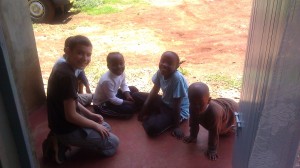 Riley made fast friends with the other children living on the compound. There are two boys about his age, plus Alexia, the little ring-leader!

The box for our refrigerator was put to very good use – it was worn to tattered threads by the end of the day!

One Response to On to Meru